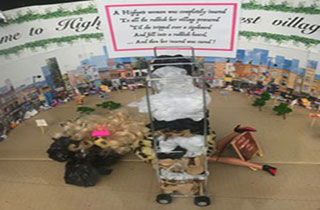 “Highgate’s quite nice apart from the rubbish isn’t it?”
Comment from an overseas tourist

“I walked through Basildon the other day and Oh My God, I couldn’t believe it, it was cleaner than Highgate!”
Comment from a resident

“I’m visually impaired and it frightens me now to walk up the High gtreet, there’s so many obstacles.”
Comment from a resident

“It’s not my job to clean the streets, it’s the council’s.”
Comment from a resident

These comments prompted me to take a closer look at the surroundings live in, and I didn’t like  what I saw; I realised that I had become inured to the rubbish and clutter on Highgate High Street.

Have we been exposed to rubbish and clutter for so long that it’s actually become part of the Highgate culture?

And if so, how do we change that culture to one which we prefer? Whether we live here or work here, or both, we all want a nice environment to live our lives in.

Let’s think of Highgate and its environs as an organisation, which it is. And then consider this:

“Culture is not something you can ‘change’ in a simple way, like throwing a switch. Culture is the life of an organisation and exists beyond its hierarchies of control. Culture hence is not ‘changed’ so much as it is revitalised, regrown, nurtured, sparked into life…”

And it turns out that most organisations are already full of people that care. Or who want to. It’s innately human to want to be nice. Consistent with self esteem  to want to do a good job. To empathise with and respect other human beings.Only corporate constraints are holding that innate tendency to care back.

In all the organisations I’ve ever met who best express the value of care, what they have done is give licence or permission to the natural tendencies of people to care: about their work, their customers and colleagues.

All you have to do then is create the space to let this happen. Perhaps you could start by demonstrating the value of care in your own behaviour.”¹

And so, taking on board the last sentence, I ventured out my front door and swept  the pavement; I swept  up the broken glass that had lain outside in the gutter for two weeks, irritating me every time I walked past but soon forgotten once I went inside and closed the front door behind me; I walked around the village removing out-of-date signs; and I propose to do a survey of local businesses and their rubbish arrangements with a view to trying to minimise the impact of rubbish in the High Street.

If you would like to be involved with any aspect of CLEAN UP HIGHGATE (an HNF initiative, and I would love you to be involved) please email your expression of interest to info@forhighgate.org (Subject: Clean Up). And please bring with you friends, family, neighbours, customers and colleagues.

Another Highgate resident, this time through the Highgate Society rather than HNF, has organised local ‘litter bees’, most recently focussing on picking up the litter at the entrance to Highgate Underground Station. If you wish to be involved in future ‘litter bees’ please contact him at andrew.sulston@allenovery.com {Subject: litter Bees).

1. BETTER by John Grant [John Grant is a Highgate resident who has published seven books on brands, sustainability.innovation and globalisation. He has advised companies such as Body Shop, IKEA, BBC, Innocent, Method/Ecover, Eden, Ecotricity. Samsung, Unilever and Pepsi).