Tell us how new bus routes would help you 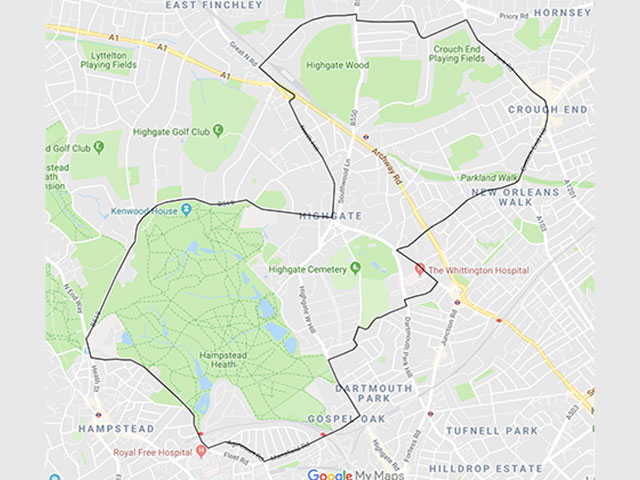 We listened to what you had to say about new bus routes to connect Highgate to its neighbours to the east and west and have come up with a new route (see map above). Do let us know what you think about it in the comment box below. We would also like to hear your ideas for extending or shortening existing routes.

And, most importantly, tell us how the proposed new route would make your life better. Do you have problems getting to the Royal Free Hospital or the Hornsey Central Neighbourhood Health Centre? Can you get to your allotment without getting two buses? How do you get to events at Burgh House in Hampstead? Can you get to the shops you need or visit relatives and friends without getting in a car or calling a cab? Where would you go if the new route was introduced?

Long term residents of Highgate will know that many of us have long felt that that public transport connections to neighbouring areas, shops, schools and hospitals are inadequate. The HNF is also most concerned about how traffic congestion is affecting the quality of the air we breathe and looking to find ways to persuade people out of their cars. We found that our neighbours in the Hampstead, Crouch End and Dartmouth Park Neighbourhood Forums felt much the same way and we decided to band together to lobby TfL (Transport for London) for more useful bus routes and, of course, low emission buses. Our GLA representative and Deputy Mayor Joanne McCartney convened a meeting with TfL for us last Spring and we received much useful data and assurance that all our buses would be Euro Vl compliant by 2020.

However, we didn’t get very far with our ideas for new bus routes – as many of you will know, TfL have some funding issues at present. So, we have asked for an agreed follow-up meeting this Autumn and have come up with one simple new route above that takes account of your comments on our previous ideas. It avoids the already congested town centres of Hampstead High Street, Muswell Hill Broadway and Highgate High Street, whilst connecting our communities to each other’s shopping centres, hospitals, playing fields, allotments, schools and amenities like Highgate and Queens Woods and Hampstead Heath.

Knowing that fighting for a new route may well be a long term business, we have also suggested extending some existing routes in the meantime i.e:

Let us know below if you have any more ideas for extending existing routes.

We are gathering data to help our cause but we need your stories to bring the figures to life and persuade TfL to take notice.

← CLEAN UP HIGHGATE What's the point of single yellow lines? →