Transport for London (TfL) have warned that bus services in central London could be cut by up to 20% under new proposals in response to savings demanded by the Government. TfL are currently consulting on the proposals which include the removal of 250 buses and 16 routes across the capital. The 4 bus from Archway to Blackfriars and the 24 from Hampstead Heath to Pimlico are two of the routes that would be scrapped as a part of the biggest bus cuts for decades.

The 88 bus would begin in Hampstead, rather than Parliament Hill Fields, to replace the 24 route, and the 214 – whilst running on down to Camden Town as now, will then go on down to Pimlico, instead of Moorgate, in order to replace the 88. With next year’s scrapping of the 271, this means there will no longer be any direct bus route to Kings Cross and Moorgate from Highgate. However, the 205 service would instead start from Parliament Hill Fields and go via Camden Town and Kings Cross and Liverpool Street to Mile End.

The 43 bus, which currently runs from Halliwick Park to London Bridge, would instead terminate at Liverpool Street.

See maps below for the proposed new routes.

The Consultation on these proposed changes runs until 12 July, 2022. Read the full Central London Bus Review and have your say at https://haveyoursay.tfl.gov.uk/busreview. 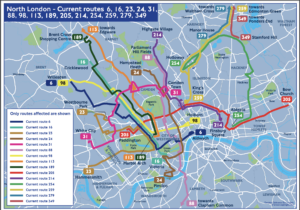 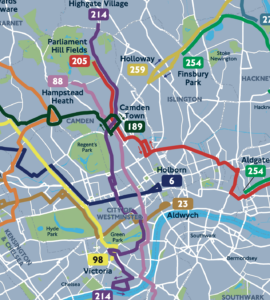 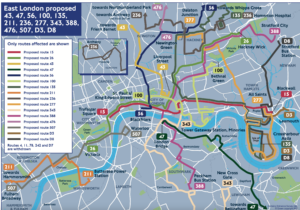