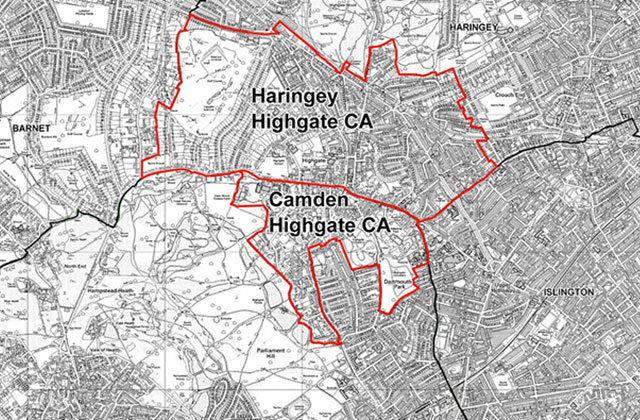 Conservation Area Advisory Committees (CAACs) are a way for members of the general public with an interest in heritage to help the council in managing and protecting the historic environment. They allow amenity societies, independent experts, and local residents and businesses to get involved with the planning process. The groups are voluntary, and members decide how they are run, and what area they cover.

Highgate Conservation Area is unusual in being situated in two boroughs, Camden and Haringey. It also abuts CAs in Islington and Barnet as well as Holly Lodge CA and Dartmouth Park CA in Camden.

Highgate CAAC has been involved in many planning issues including the attempts to develop the Highgate Bowl and the threatened demolition of Athlone House. In smaller matters our attention to detail and determined objections to unsuitable development has ensured that Highgate has maintained its special atmosphere and architectural diversity for all to enjoy.

The Highgate CAAC usually meets every 3-4 weeks. At its meetings the plans for new applications are discussed and our response agreed. We also receive reports of meetings and events concerning bodies of importance to Highgate such as Hampstead Heath and Kenwood. We keep abreast of new developments in things like the plans for waste disposal in North London, the development scheme for Archway, and we comment when it seems appropriate.

HCAAC is  keen to recruit new members to the Committee. We would like the Committee to be widely representative, with as far as possible one member from each local association or neighbourhood in the CA. The best qualification for members is to have a real interest in and concern for Highgate and its special character. Professional qualifications in architecture or planning can be very helpful when looking at complicated planning applications but are not essential. We look forward to hearing from potential new members.